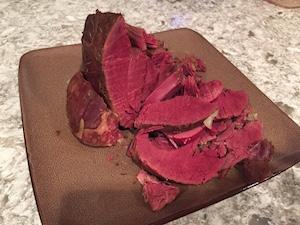 Nitrites and nitrates in curing meat have gotten a bad rap over the years. For everything you read out there telling you to avoid it, you can find just as many articles telling you it’s safe. I’m not going to go on here about what is right or what is wrong. What I will tell you is, based on the research I’ve done, I use it, it hasn’t killed me, and my cured meat products are MUCH better because of it. The important lesson to learn, and this applies to pretty much anything in life, is: moderation.

They are preservatives, so their general purpose is to kill things. Primarily microbial things. They can be toxic in large quantities to a person, but when used appropriately are quite safe, as indicated and regulated by various government agencies. Nitrites and nitrates are found in many things: celery, spinach, kale, and even your own saliva have significant concentrations of the stuff. So if you see processed meat in the grocery store that says it’s nitrate free, but instead it uses celery juice as a preservative – that is just a marketing scam.

Sodium nitrite goes by many different names: Instacure#1, Prague Powder #1, Pink Salt, etc.. It’s pink because they put coloring in it so you can tell it apart from table salt. The #1 will typically refer to sodium niTRITE and the 2’s are for sodium niTRATE. Nitrates are more commonly used in your cold curing processes, like hard salami and the likes.

You will not get the color or the flavor you want if you decide to not use nitrites/nitrates. A corned beef or pastrami without Instacure#1? Brown and ugly when you cook it. Bacon without it? I don’t even want to think about it.

Just remember, a little goes a long ways. Use it as described in the instructions on the package, or in your recipes, and you won’t have any issues. And you will get fantastic results with your cured meats.