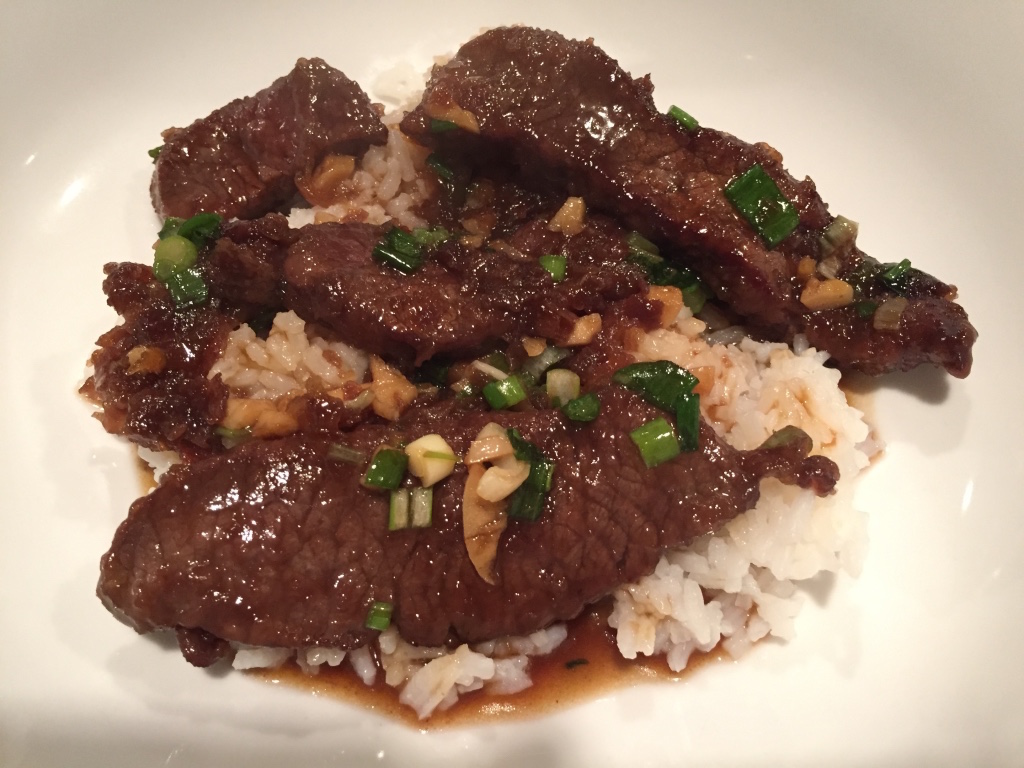 Sometimes you just want a quick meal. With most cuts of venison being on the tough side, a lot of recipes are either complicated, or sssssslllllllloooooowwwwww. And that’s all well and good – unless you have a real life, with a busy day, where you get home late, and just need to get some food on the table. We all know about those tender cuts from the loin and the tenderloin – awesome quick cookers. But those go quick. So let’s talk about how to make use of some of the other cuts of venison and still get a good meal when we don’t have a lot of time.

When I think about fast food involving beef (restaurants can’t serve venison unless it’s farm raised – keep that in mind when you see it on the menu, and then do some reading on CWD), I tend to think of asian style restaurants. I’m talking non-burger fast food here. And the trend with asian style beef? Thin slices, cut across the grain. So, we’re going to stay away from the front of the deer, where you have a lot of smaller muscles and more connective tissue, and use the rump roasts.

From the rump, there’s three major muscle groups that typically make it into larger roasts, giving us the top round, bottom round, and sirloin tip. Any of these will work perfectly for stir-fry, although the sirloin tip tends to be bigger around. The top and bottom rounds are a bit flatter, giving us better “strips” of meat. The sirloin tip is actually made up of several smaller muscles, so a cross section will have more potential for separation than either of the rounds – the rounds are my preference for stir-fry here.

If you enjoy stir-fries, you may want to dedicate a roast or two to stir-fry cuts when you butcher your deer. For a lot of stir-fries, you’ll only need a pound or two of meat, so if you make the slices ahead of time, it will save you defrosting and slicing a larger roast later. I don’t typically do this, as I’ll usually use the rest of the roast in something else later in the week, but it is a nice convenience option.

Heat a little oil in a small sauce pan on medium-low. Add the garlic and ginger and sauté for several minutes. Stir in the soy sauce and water. Add the brown sugar and increase the heat to medium. Bring to a boil for about 3 minutes, then remove from heat and set to the side.

In a bowl, dredge the venison slices in the cornstarch, shake off any extra, and place them on a plate. Let them set for about 10 minutes.

Heat some oil in a wok on medium high. Add the venison slices, and cook for just a few minutes till they are seared on both sides. Remove the venison to a paper towel lined plate, and remove any excess oil from the wok.

Put the wok back on the stove on medium high heat, and add the sauce – it should boil right away. Add the venison, and cook at a boil for about 2 minutes. Stir in the green onions, and you’re done.

Serve over a bed of rice. This recipe is a bit on the sweeter side – which I like – but cut back on the brown sugar a bit if you prefer things a little less sweet. I’ll sometimes add some pre-cooked broccoli or sugar snap peas at the end to beef up the vegetables in the meal as well, or pair it with some wonton soup!