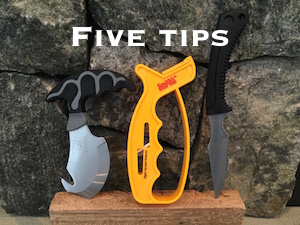 There are a ton of tricks out there to speed up the process, from using your truck, a winch, or lately I’ve seen a number of videos on using compressed air to “inflate” the skin off. I’m not going to go into any of those here. If you are a commercial processor, or maybe a successful hunting camp where you need to skin a lot of deer, then I’m sure those speed methods come in handy. I only ever have one to two deer to skin at a time – so I do it the old fashioned way, with a knife and elbow grease.

Even though I do it the hard way, here are a few tips to make your deer skinning job easier.

Tip 1: Never, EVER, let the deer freeze before you skin it.

DON’T let it freeze. If the temperature is supposed to drop, protect the deer somehow. If you can’t hang it in your garage, then wrap it in blankets or whatever you have handy. If it does freeze, the job will take ten times longer –  the worst part: plan on not feeling your fingers while you are doing the work.

Tip 2: The sooner you skin it, the easier it is.

Personally, I very seldom ever age my deer before processing it. There are a number of reasons  why I don’t, which I’ll go into more detail elsewhere – but the tie in here is that the sooner you skin the deer after you kill it, the easier it is to skin. You can find some YouTube videos of a guy skinning a deer in less than two minutes. If you look closely at the deer, you can tell it was very freshly killed. If you do age your deer, waiting a few days to skin it won’t make it impossible, just understand that it will be more difficult than if you had skinned it the same day the deer died.

The first thing I do, is cut the forelegs off. A knife will do, but a set of loppers is even quicker – They work just as well on bone and cartilage as they do branches. You want to cut it right in the joint, that will cut much easier than going through just solid bone.

Then you need some knives. Sure you only need one knife. But have two and the job will be a breeze. You want a rounded skinning blade, and a thin blade such as a caping knife or a fillet knife. Use the thin blade to cut the hide. Use the skinning knife to separate the skin from the body – the exaggerated rounded blade makes it easy to just run back and forth as you move down the body.

Tip 4: Keep the hair out of the meat!

It is much easier to keep hair off the meat than it is to try to clean it off if you make a mess. There are two main ways you are getting hair on the meat:

If you do still get some hair on the meat, a damp paper towel can scrub most of it off easily enough. Or run a torch over the meat to singe any strays off – just a quick burst will clean it up nicely. If you follow the steps above though, odds are you won’t need any clean up.

Tip 5: Have an extra set of hands.

Having a partner just makes it go faster and smoother. Have your buddy do the pulling while you do the cutting (or vice versa) to help avoid hair contamination. Your hands are going to get dirty – having someone else around to run errands, get more water for cleaning utensils, raising or lowering the deer, changing the radio station, getting another round of beers – hey it just helps to keep a cleaner work site, meaning less cleanup when the job is finished!

Sure, you can do one of the gimmick skinning methods, and I’m sure they work well. But learn how to do the job right first, with minimal tools. And once you’ve done it a few times, you’ll find it’s pretty easy to skin a deer, and doesn’t take much time. Unless you let it freeze. Then good luck, because the gimmick methods won’t even save you then!