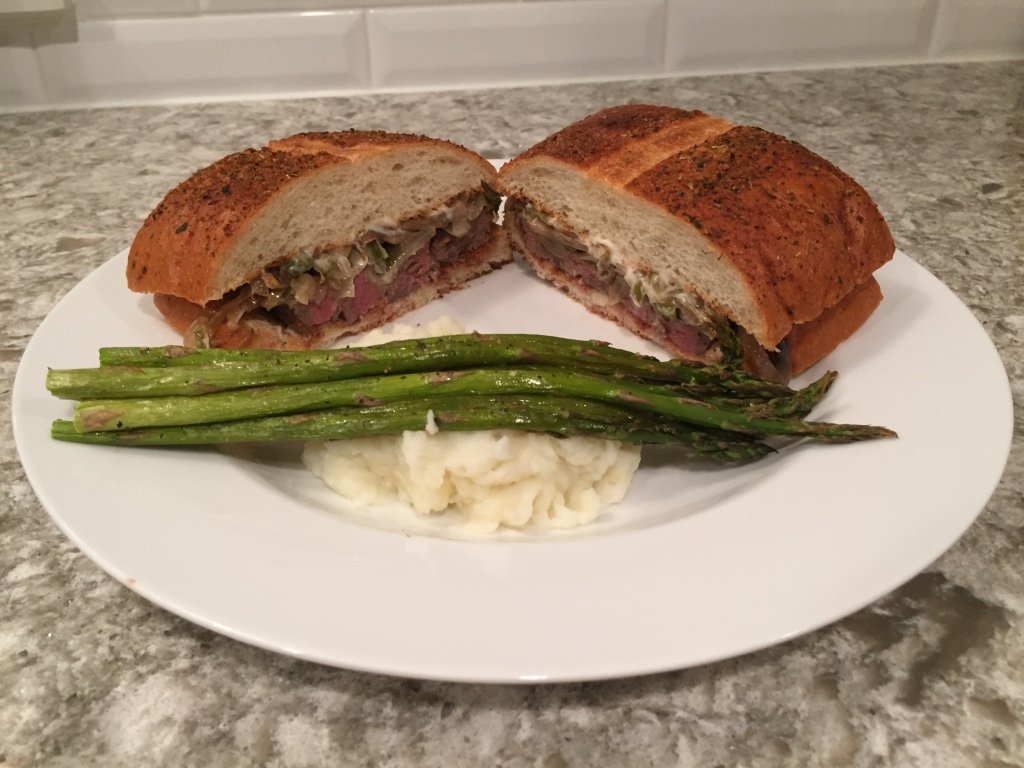 Some people may think me a bit crazy. “Venison tenderloin?! In a sandwich?! What a waste!” Many hunters only ever have the tenderloin as a quick grilled roast, and I have nothing against that. What I will say is, making a sandwich with the best ingredients will give you a meal you will remember.

The tenderloin is usually one of the first cuts of of the deer to hit the table after the kill. Two main reasons for this: 1) they are naturally the most tender cuts, and 2) you have to cut them out right away or they will get tainted, or worse, wasted.

The reason they can be ruined is because of location. They are located inside the abdominal cavity, and and are directly exposed to the elements (and anything that might happen during dressing) once you field dress the deer. I normally remove the tenderloins during field dressing, or immediately once I get the deer back to camp to minimize exposure. The tenderloins aren’t very big to begin with, I don’t want any of it to go to waste!

Now, I’m posting this under “recipes”, but as it’s a sandwich, this is really just a general process. I like sandwiches. No, you don’t understand. I REALLY like sandwiches. So, my general goal is to make every sandwich I eat the best sandwich ever. At the same time, it is just a sandwich, so unless you turn the meat to leather, or commit some other sandwich atrocity, you really can’t go wrong…

To start, take the tenderloins and flatten them out with my tenderizing method. You may ask yourself “why are we tenderizing a tender cut of meat?”. My response, in usual fashion is, two reasons: 1) I’ve had tough tenderloin, even when cooked rare, and 2) the resulting flattened steak cooks more uniformly.

Also on Venison Thursday:  Venison Burgers - Skip the fat, use a binder

When tenderizing the tenderloin, I normally don’t slice it in half as I did on the loin example in my other post. Because they are so much smaller than the loin, there’s no need to. Just flatten them right out as is – I like to get them to about three quarters of an inch to an inch.

Once flattened, coat with olive oil and a generous coating of salt and pepper on both sides. Then let them sit in the fridge – sometimes I’ll do this for just  15 minutes, sometimes I’ll let them sit there all day. If you have a tough old buck, letting it sit longer will make it more tender.

Once dinner time (yes, I eat sandwiches for dinner) comes around, get your cast iron skillets out, and start prepping any other ingredients you will be stuffing between your bread. This time around, I went with some peppers, onions, and mushrooms. Once they are cooked, THEN you get your skillet ready for the tenderloins. They only take a few minutes to cook, so I always prep everything else first – you don’t want the venison to get cold waiting for the onions to caramelize.

Add enough oil to cover the bottom of a skillet big enough to hold the two flattened steaks. Put it on medium high heat. Once the oil is HOT (if it’s smoking it’s too hot), throw the steaks in. Cook them for just two to three minutes per side – if your pan is hot enough, they will have a nice sear on the outside, but still be rare to medium rare in the middle. Pull them off and let them set for about five minutes. Take this time to get the rest of your fixings ready.

In a nutshell, flatten the tenderloins, season them, then cook them fast and hot. This could be done from start to finish in less than ten minutes. The loins can easily be substituted here as well – I wouldn’t normally use other cuts besides loins/tenderloins because they’ll be tougher.

And most importantly, always remember: EVERYTHING is better in a sandwich.