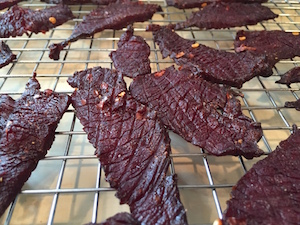 I’ve been making venison jerky for over 15 years, and to be honest, I screwed it up a lot. Jerky is so easy to make, how did I keep messing it up? It was never the recipe. That was truly the easy part. My problem was in over cooking it.

The key to good jerky is the right moisture content. To get it right, it’s just one of those things you have to try a few times.

My doneness test itself is actually pretty basic: fold a piece of jerky in half, tear it a little at the fold, and squeeze that tear with your fingers.

Fold: When you fold it, it should bend without breaking. If it breaks, it’s over done. Game over.

Tear and squeeze: When you tear the jerky, you are exposing it’s interior. When you squeeze it at the tear, if there is excess moisture left, little droplets will come out meaning it needs more time.

My struggle was recognizing the perfect balance. The first few times I got frustrated, so I switched to using ground meat through a jerky gun. Because the meat was ground, it was much more forgiving if it was over dried. Nothing wrong with going the ground meat route, I just feel there is some kind of purity to biting off a piece of jerky that is obviously a slice of meat, something more cowboy, or caveman about it. I do still use the jerky gun, but usually just on trimmed left over meat, or for making dog treats with leftovers that weren’t good enough for me to eat (i.e. there’s no way my wife would eat). My dog never complains about any venison snacks..

For jerky, you want a cut of meat that doesn’t have any connective tissue in it, and that you can cut cross grain to get large enough slices for a decent piece of jerky. I will almost always use either the top round or bottom round. You could use the sirloin tip (it would make an awesome jerky circle! might need to try that!), but I like to save them for corning.

I’ll usually start by dissolving the sodium nitrite in just a little bit of water. This way I know it’s all dissolved (when you mix in the garlic powder and pepper later, you would wonder if you hadn’t). Then put everything else in (except the meat) and whisk thoroughly.

Slice the meat in thin even strips. I use my food slicer to ensure consistency. It works best if the meat is partially frozen, whether you use a knife or a slicer.

Put the meat in the marinade in a covered container or a zip-lock bag and marinate in the fridge for 48 hours. Swirl/stir it a few times to ensure even coverage.

Pull the strips out letting the marinade drain off a little, and arrange evenly on your dehydrator trays.


Dehydrate for 4-6 hours on the meat setting (usually 150-160), using the doneness test above to determine completion.

Because dehydrators can’t guarantee you got the meat to a proper temperature to kill off pathogens, finish in a pre-heated oven set to 275 for 10 minutes.

Let the jerky cool and then package for storage. This recipe is probably shelf stable, but I store it in the fridge in a plastic storage bag. It’s gone within a few days, so I can’t speak to how long it would last in the fridge.

If you make this and plan to share it, you better make a lot if you want to have any for yourself!