Skip to content
HomeReading Book Review: Meat Eater: Adventures from the Life of an American Hunter 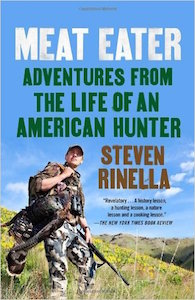 I don’t watch hunting shows. Most of today’s shows are made purely for entertainment. I don’t hunt to be entertained. I hunt to eat (please don’t sue me Janis). So when one of my buddies told me about this show called “Meat Eater” with Steven Rinella, I was like, ok, whatever.

Then he would pester me every once in a while. “Did you see the show where he cooked the bear?” or “You have to see how he cooked the heart!”. It was time to check it out. I’ve never seen a hunting show where they actually cook what they kill.

The first episode I saw, Steve goes out in the mountains. He hunts for a whole week, busting his ass in the field, up and down these mountains. He had a harder hunt in one day than I ever hunted in my life (I have a nice river valley hunting camp – nice and flat, and I LIKE it like that!). He gets skunked, and goes home empty handed, but determined to try again.

Holy crap. Skunked?! And he made a show about it?! I can respect that. I was hooked.

One thing Steve does at the end of every show is cook some part of what he kills (if he has a successful hunt). This isn’t a cooking show, but to me it’s more a demonstration about what the hunt is about. Hunting isn’t about killing. It’s about living.

While this may seem like I’m going on about the show, the book is a very complimentary read to the show. Steve is a great story teller, and it shows in this book. A good part of the book covers Steve’s youth and background on how he got where he is.

Also on Venison Thursday:  Let a Hitch Hoist do the heavy lifting on your deer

Most books I read fall in two categories: I learn, or they have swords. Or magic. Or swords AND magic. While this book doesn’t quite fall in either of those categories, the stories were good. AND in similar tradition to the show, each chapter ends with a wild game recipe and some insight into that animal or recipe. One of the things I really appreciated about the book is Steve’s take on some of the ethical conundrums of hunting. Why do we kill these animals? Why do some fishermen do catch and release? These are conversations every outdoorsman  should have, with themselves, AND with other hunters.

So, check out Steve’s book, Meat Eater: Adventures from the life of an American Hunter. And check out his show. AND his podcasts. It’s a bunch of guys sitting around talking about hunting! He’s not paying me for this, so if a cynical hunter like me likes it, I think you’ll like it too.

Get his book from Amazon: